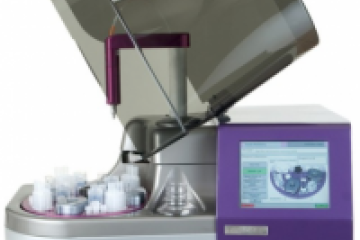 The STEMCELLTM Technologies RoboSepTM is a laboratory instrument that automates EasySepTM immunomagnetic cell separation. EasySepTM is a column-free magnetic cell separation technology that enables both positive and negative selection of desired cells from virtually any species. Using an integrated color touch screen, RoboSepTM can be programmed to purify cells from up to four samples at once. The user simply loads the consumables as indicated on the built-in touchscreen and starts the experiment; RoboSepTM then automatically executes the EasySepTM immunomagnetic labeling and magnetic separation steps using disposable pipette tips.

With EasySepTM positive selection, highly purified cells are obtained by targeting the cells of interest with antibodies directed against one or more specific cell surface antigens. These targeted cells are cross-linked to EasySepTM magnetic particles. The sample tube containing the cells is then placed directly in a specially designed EasySepTM magnet. The unique magnet generates a high gradient magnetic field in the interior cavity that is strong enough to separate cells labeled with EasySepTM magnetic particles without the additional magnetic field gradients provided by a column matrix. The cells that are not bound to the magnetic particles are removed either by pipetting off (RoboSepTM) or by inversion of the magnet (manual EasySepTM). To obtain a highly purified cell population, the cells remaining in the tube can undergo additional separations prior to being collected by removing the tube from the magnet (Figure 1). Unlike larger particles used with other column-free systems, the EasySepTM magnetic particles used in positive selection procedures do not interfere with subsequent flow cytometric analysis and do not need to be removed.

For EasySepTM negative selection applications, unwanted cells are targeted for depletion using a cocktail of monoclonal antibodies directed against specific cell surface antigens. The labeled unwanted cells are then cross-linked to EasySepTM magnetic particles. The sample tube containing the cells is placed in the specially designed EasySepTM magnet. The desired (unlabeled) cells are removed either by pipetting off (RoboSepTM) or by inversion of the magnet (manual EasySepTM). 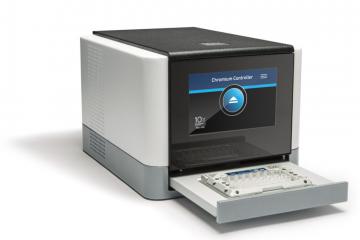 The suite of Chromium Single Cell products can capture molecular readouts of cell activity in multiple dimensions, including gene expression, cell surface proteins, immune clonotype, antigen specificity, and chromatin accessibility. The key to this technology is its ability to generate tens of thousands of single cell partitions, each containing an identifying barcode for downstream analysis.

© 2021 The Regents of The University of California